So I have spent a little bit over an hour in the Boston airport so far. Prior to actually coming here, I thought I was really going to like this airport. Turns out it seems to be just the opposite. Before I continue I will say that if I lived in Boston and was taking a non-stop flight, this airport would be great. That being said, that is simply not my case. As well, I suppose spending nine hours in any airport would give you the impression that you dislike the airport. However, I think If I were in Philadelphia it would be a bit more fun.

My flight from Philadelphia to Boston was great! I had some of the most kind flight attendants I have ever come across and it just so happened I lucked out with no one in the seat next to me. When I arrived in Boston everything seemed rather typical so as I started walking down the B terminal looking for signs for the E terminal I found myself almost lost. Eventually, I asked a security guard where I was supposed to go and he opened up a door for me so I could walk or take a shuttle over there.

I was going to take the shuttle; however, there were so many signs for other various shuttles I opted to walk.

So while I am walking, on the directional signs it only shows where to go for terminals A and C leaving a slight chance that I was walking in the wrong direction. Fortunately, it didn’t really matter because I had so much extra time to spare. As I was walking through the airport towards A and C I found a map telling me I had gone a little too far and had to basically go through the check-in area for A to get to the walkway to terminal E. This would have been very easy if the first time I saw a sign for terminal E wasn’t until I was actually in the walkway to terminal E. So eventually I got to the terminal where I realized I had to go through security all again.

Since my flight was so much later I waited a little until I knew for sure that my flight would be in terminal E so I didn’t have to go through all this nonsense again. Out of the corner of my eye I saw on one of the boards that it had flights listed for tomorrow so I figured it had to have my flight listed and luckily for me, it did.

After I finished the sandwich I got from a small café, I packed up my stuff to head through security again. After I got out and found a nice seat where I could have my feet slightly elevated and near a plug–which was actually a really nice—I opened up my computer to go on to the Internet for a quick browse. After what I found out was 20 minutes, I was kicked off the ifi because they only allow to use the wifi for 20 minutes. I was a little disappointed because now I had to rethink what I was supposed to do for the next 8 hours. Fortunately I have my phone, Ipod, books, and can still do other things on my laptop that do not involve the Internet. So, that is why this is also being posted a little bit later.

The funny kind of ironic thing about all of this is that before I was joking around saying how I cold go out and see Boston for a few hours but didn’t want to because I didn’t want to have to leave the terminal and go back through security again. Obviously it wasn’t too late, but of course after I decided I wasn’t going to leave I need to go back through security again regardless. 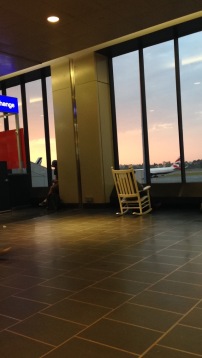 So on to a little more positive note, once I actually entered the international terminal, I found myself with a stupid, giddy smile on my face that I am not ashamed of. While I was walking to the gate I found myself behind a family with a young daughter who was amused and entertained by absolutely everything and I felt the same way. When I looked out the window and saw the cityscape and signs for Boston I got butterflies and found myself taking pictures and then just simply thinking that later tonight I will be going abroad had me tickled pink.

Every time a worker or someone asks me where I am going I can’t help but say with a smile my final destination. This long process of getting there, so far, has been completely worth it because my anticipation and excitement has been building and building because now, it is real that I am actually going.

Anyways, I hope you all have beautiful days! Can’t wait to share more

Extra dirty martini please 🍸
so what’s it take to make me wanna stay a little longer
it’s always sunny when @hayesforhorsesofcourses visits Philadelphia 🌞🌞
daydreaming 💫🌝
My Bliss!!! 💫
but it's all fine, or it's all crime anyway
Loading Comments...
%d bloggers like this: