Once it was eventually time for me to board my flight to Doha, I was surprise to find out I was actually zone two, which was kind of nice. I was flying Qatar airways for the first time ever and it was absolutely outstanding! The service was great, I got a free blanket, pillow, and eye mask kit thing, and there was an awesome movie selection.

Once the plane was safely in the air, the first food service took place. I had preordered myself vegetarian dishes to make sure I would have something to eat and it was absolutely delicious!! The main was a sort of Indian curry with a side of a little cucumber and tomato salad. I was definitely impressed! After, I decided to start watching the movie Hot Pursuit and once my tray was taken away from me, I tried falling asleep. From then (around 1 am) until about 9 in the morning New York time, I was in and out of sleep which is good for me because usually I find it very challenging to relax and fall asleep on planes. The best part of my napping phase was when I woke up and it just so happened I was lucky enough to witness the sunrise. It was absolutely beautiful and it is such an experience to witness the sunrise or the sunset form the POV of the sky.

I was eventually woken back up by one of the flight attendants telling me my vegetarian meal was ready. Any of my friends who have ever come into my room to wake me up to go somewhere know that my usual response it to just go without me and then I’ll catch up later when I am ready. Well, I was about to tell her I wasn’t hungry so I could sleep some more but 1. I felt bad because she had a special meal ready for me and 2. If I didn’t eat now I probably wasn’t going to eat again until my flight to Bangkok at 8:50 local time. So, I quickly gathered it and ended up scarfing down my delicious breakfast.

I was served Tofu, Potatoes, and this sort of curry sauce with it. Once again, it was absolutely wonderful! After I finished my meal, I realized it was a good idea I decided to wake up because there was only about two more hours left in the flight.

At this point, I decided to actually talk to the passengers next to me and found out they both were actually going to be on the same flight to Bangkok as me, which was pretty cool!

For the rest of the flight I simply just listened to music and watched the map, which was nice.

Once our plane touched the ground I got the butterflies in my stomach again because I was somewhere completely new. There’s something about the force of the plane when it touches the ground and jolts your body forward that just excites me. Ever since I was little and flying places on family vacations this was one of the most exciting parts because this meant I made it and I was going places. 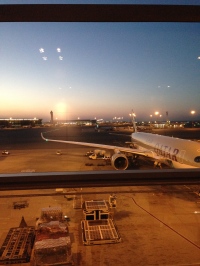 Once I got off the plane I thought I new what I was doing because I followed the signs to where it made sense to go; however, if I’m being honest, there was a pretty good chance I was headed in the wrong direction and standing in the wrong line. This could have been a huge problem because I only had about an hour until my plane was supposed to start boarding, so if I was wrong, I would be going for a nice run through the Doha International Airport.

Fortunately, because I met people on the plane who were going to the same place as me, I eventually recognized them standing in line a bit in front of me and let out a massive sigh of relief.

After making it though the transfer security check, I headed down the escalator to the departure area. There is only one word that I have found properly describes the Doha Airport: Grand. In the area before the terminals break off it is fully of bright lights, statues, and what seemed like any shop you could want. Even the bathroom was beautiful!

So now, here I am sitting in Gate B1 waiting patiently for boarding to start for my flight to Bangkok. I can’t wait to finally be in Thailand and can’t believe it will be Friday when I get there because even though a day has passed since I was in the US, it does not feel like it at all!

Anyways have a wonderful day!!

the sun and your eyes were the only fire
A lovely vacation with a bunch of lovely people 💕💫🌞
the lovers, the dreamers, and me 🌞💫
Happy to be happy 🌞 here’s to many more days laughing on the beach this summer and soaking up the sunshine ✨☀️
you said you’ve been to the sky, we’ll go beyond that.
you were created to perceive the beauty of creation and to live your life in love.
Loading Comments...
%d bloggers like this: