I am officially covered in mosquito bites. It is at the point where I don’t even care if I put on bug spray because I will still be itchy from how many I already have. I would try to count but there is not point because there are too many. That being said, I’m not even really mad about it; it’s just kind of an inconvenience.

Thursday after I finished writing my post for the second week of classes at CMU, my friends and I left the coffee shop we were writing in once it closed around 6 and went to the market to grab a bite for dinner. I was excited that I was able to find shrimp wonton soup on the menus, because I was in the mood for soup. Once my food was brought to me I was surprised when the lady told me 80 baht. The menu had said forty so I was unsure if I misread it or if the menu was just wrong.

After she set down two big bowls of soup I realized that it was my fault and I had really just messed up my Thai so instead of asking for one I guess I asked for two. Instead of fighting it I just handed over the money and actually ended up finishing both so I guess it all worked out.

The good thing was at least I managed to get the word for shrimp correct so at least my meal was vegetarian because like I wrote about earlier, it is very easy to say a word with a wrong tone or pronounce something wrong and get something completely different, or even end up with blood in your soup.

After, even though I was full, there was a strong, magnetic like attraction between the crepe stand and me, so I ended up also enjoying a delicious banana-nutella crepe.

Once we were all done eating we realized it was only just hitting 7pm and none of us were ready to head back to the hotel and call it a day, we simply just dropped off our bags and then head back out to walk around the city. When we finally got back out of the hotel again there was a tuk tuk sitting across the street waiting to take people so we decided to hop in to go where we wanted and also got to check “ride in a tuk tuk” off our Thailand bucket lists. The tuk tuk was super fun, although I really have no need to take one again since they are a tad more expensive than the red truck.

The most memorable thing about this night was I finally had my first squat toilet experience, which was interesting, but honestly not bad at all! If you don’t know what it is, it is basically a glorified whole in the ground. The only thing I found a little strange was that to use the bathroom, I had to pay 5 baht. Something about paying to use a toilet that is a whole in the ground just isn’t right, but there were no other bathrooms around so what else are you supposed to do… plus at the end of the day it was only 5 baht.

Friday for our Buddhist philosophy class we had arranged to go to the monk chat program at wat suan dok. After being dropped off, we waited in the monk chat and meditation lesson building until a monk was available to chat with us, which only took 20 minutes. It is a really neat program because our monk explained that he is part of the is program so he can practice his English.

He was a student at the university at Wat Suan Dok studying Buddhism and English in his third year, and he has been a monk for the last 9 years. We only talked about Buddhism related stuff for about 20 minutes but the rest of the time we just spent having what felt like judgment free conversation learning about meditation and calming our minds. Everyone there was so friendly and treated us really well. The head monk chat monk gave us great thanks and wished us peace and happiness in our hearts, which I thought was a really kind thing to wish a person when you are saying goodbye, most likely something I’m going to try to start doing. 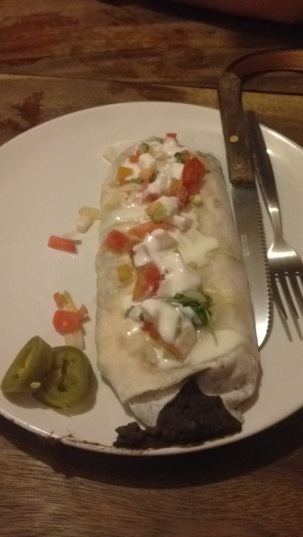 After, we had a little bit of time to relax before we went to this restaurant called el Diablo’s, which apparently had the best Mexican food in town. I ordered a bean and rice burrito and it lived up to every expectation I had… plus after two weeks it was kind of nice to change up the cuisine a little bit. After, we ventured around a little longer near Thae Pae gate, because that is where the restaurant was near, and eventually made our way back to the hotel to get a good rest before our trekking excursion that was booked for us for Saturday!

Sorry to be writing this so late and kind of out of order, I guess I lost track of time and forgot to make time to write until after white- water rafting.

Hope your day brings you peace and happiness!