This blog pertains to a hard-hitting, potentially controversial issue. If you are a fellow pastry enthusiast like me, read on. For the sake of the general public and journalism I made it my mission today to do a little Lewiston, NY pastry taste test.

I sampled two bake shops I have never tried: DiCamillo Bakery and Village Bake Shoppe. My goal today was to pick a winner and help give some insight as to which shop you may prefer.

So here we go.

I started off at Village Bake Shoppe (no particular reason, it was just closer to where I parked). As soon as you walk in you notice an extensive counter and a variety of seating. I was a little surprised, but at the same time happy to find out that not only do they have pastries, but they also serve lunch, breakfast, PIES, and other sweet treats.

Initially I my thought process was to get items that I thought I would easily be able to compare to the other. Ultimately that didn’t go as planned, but oh well. From each place I picked two things, so yes I will indeed be hitting the gym later.

From Village Bake Shoppe I chose a cherry turnover and a cannoli. The selection of goodies here definitely seemed to be more geared to sweet treats rather that the typical pastry items I was sort of expecting (not complaining though).

I’ll start with the cherry turnover. 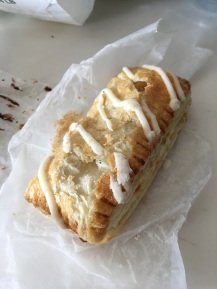 To be honest, I would not get this again and I really wouldn’t recommend it. It took a couple of bites to get to the cherry filling, and in my opinion, they went a little too skimpy on the cherry. This was very doughy and the pastry part was neither flakey nor had a lot of flavor, unfortunately. In the shop I was immediately drawn to this because it reminded me of pastries I tried while I was backpacking through Europe. Lets just say it wasn’t anything near comparable. The only reason I continued to eat it was because I was trying to convince myself I would like it. 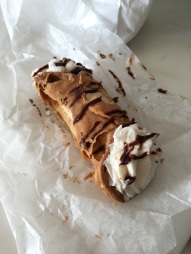 On to the cannoli.

This was great! I don’t know why I decided to buy a cannoli in the first place because I usually don’t like them. I think I just continue trying them because they look so stinking pretty and that makes me want to like it. This one was actually delicious! The filling had a really tasty flavor and the filling to shell ratio was perfect, in my opinion. You could taste the gentle sweetness as well as the subtle flavor influences from the ricotta and a slight cinnamon/nutmeg flavor, but in a way that none overpowered the other. 10/10 would recommend.

I paid a total of 6.48 for both goodies, but I am guessing the cannoli was what upped my total a bit. Personally I think this is a tad pricey but not horrible.

I walked a quick two blocks to DiCamillo Bakery and was once again a little surprised when I walked in. This was what you would imagine when you think up a small town bake shop. Here they feature more breads and a couple of sweet treats. The selection was a little bit smaller but they still had plenty to choose from. As well, there did not appear to be any seating in here.

Similar to the cherry turnover, I was not impressed… at all. The cookie was rather hard, and not in a good was. I literally took one bit and put it back in the bag to eat later (yes I am still going to eat it). Too be honest I don’t have much more to say about that cookie other than it tasted like sadness.

I’ll just cut to the chase, this was INCREDIBLE, seriously. I don’t really mess around when it comes to Danishes so I would like to think I am a rather reliable source on this judgment. The pastry part was super tasty and the perfect combination of flaky yet doughy consistency (I am by no means a baker so sorry for my funky lingo). The filling is what really sold me though. Holy moly. It was the perfect sweetness mixed with just the right amount of savory for more umami in the mouth. The best part was this sucker was huge and I have no shame in saying I ate the whole thing without thinking twice. I would 100% be going back there to get it again, my only hesitation is that there was no place to really sit in there. Next time I would probably get one and then walk down to the waterfront.

The best part about this place was for both things it only cost be 3.29, which I thought was very reasonable.

All in all I would say if you are looking for something more tradional, go for DiCamillo Bakery, if you are looking to treat yourself a bit more head to Village Bake Shoppe. The overall pastry winner for me was hand down the Danish. I would say the cannoli was just as good, I am just extremely biased toward Danishes.

As far as shops go I would vote Village Bake Shoppe because I really liked how you could sit there and enjoy whatever you got if you wanted to.

I think I may have to try this experiment again and instead as the worker what they recommend and do a comparison that way.

Four pastries later, I think it’s time for me to hit the gym!

Hope you all have a wonderful day!

Extra dirty martini please 🍸
so what’s it take to make me wanna stay a little longer
it’s always sunny when @hayesforhorsesofcourses visits Philadelphia 🌞🌞
daydreaming 💫🌝
My Bliss!!! 💫
but it's all fine, or it's all crime anyway
Loading Comments...
%d bloggers like this: